E-sports is a very large part of the video-gaming ecosystem right now. So I thought: why not write about one of the biggest, The International 4? I hope you find it even fractionally as interesting as I did watching it, even if you know nothing about DOTA 2 or e-sports in general. 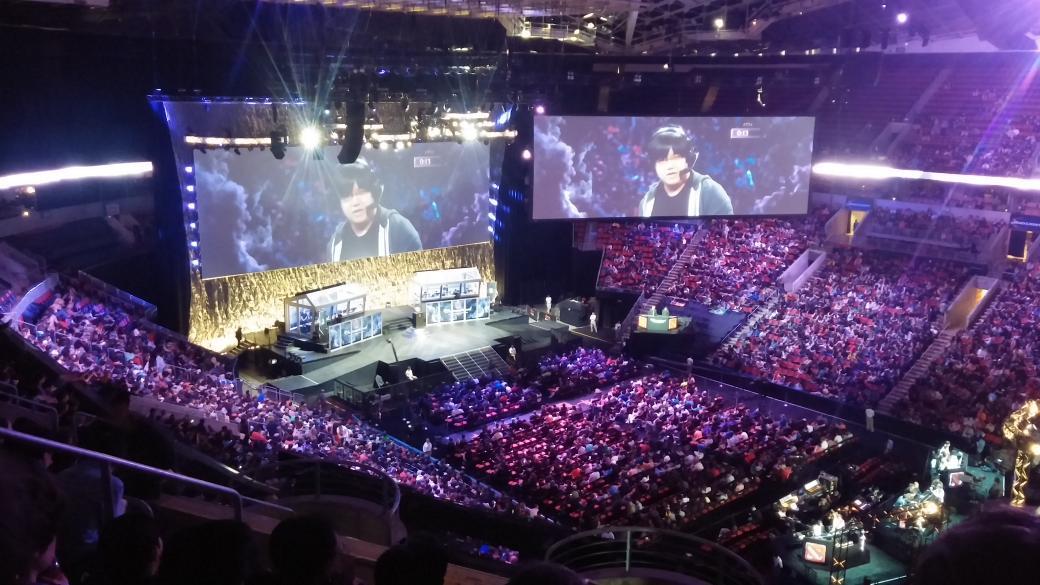 The production values of Ti4. Courtesy of William ‘Blitz’ Lee

DOTA 2 is a competitive Multi-player Online Battle Arena or MOBA for short. At it’s most basic, there are two teams of five who chose from a roster of dozens and dozens of characters and battle it out on a map, with the objective being to destroy the other team’s base. The challenge and the skill comes from the players combining items with their chosen heroes to maximise survivability and damage whilst trying to juggle team composition, positioning and getting the money to level up and buy said items. This game is far too deep go into too much detail here but take my word for it, this game is incredibly complicated at the highest level of competition.

The International is the Valve (developers of DOTA 2) hosted competition where the best teams come together in Seattle and battle it out for the Aegis Shield (the trophy) and a cash prize. This year Valve used a percentage of the profits from the Compendium players of DOTA 2 can buy – a digital leaflet has information of the teams and the event – to increase the prize-pool to an unprecedented 10.5 million dollars, with the winner of the entire event receiving 5.5 million dollars. Which is the most money an e-sport team has won, ever. On top of all of this, it is shown in front of a basketball stadium filled with people, streamed on out Twitch to an audience of hundreds of thousands and it is shown on ESPN2 channel.

It is ridiculous since all this spectacle is for a videogame of all things. Valve have a panel of pundits, one of whom does nothing but talk about statistics, that talk about the game just like a ‘real’ sporting event, two commentators during the game is going and it is all done with some seriously impressive production values. Long gone are the days where this would be in a small room at the back of a community centre. What makes this actually interesting to watch like football, cricket or rugby? Well each match is incredibly tense because of the money on the line in combination with fast paced technical game-play where slip ups can, and do, happen. The games, much like typical sports matches, can come down to incredible feats of skill that, as a player of this game, all I can do is shake my head and exclaim shock as I watch a player do something that I could never do. Much like everything else, it isn’t for everyone but once you get invested, the event is a thrill to watch. So, without further adieu, this is what happened at this year’s International:

In the run up to The International, a time where the teams battle out to prove which bracket they will be put in (the bracket you are in depends on how many games you have to play to reach the grand final), there were two major upsets. Alliance, the Swedish team that won last year’s International, went full Spanish World Cup team and bombed out HARD. They were the favourites to reach the final and it was a huge surprise for them to not even get to the actual event. The reasoning, people say, is because they always used the same tactics and the other teams finally worked it out. The other Scandinavian team, Fnatic, also shocked everyone by not getting to the main event. They weren’t considered serious contenders for the trophy, but they are a veteran team who are regularly in tournaments. They were simply outclassed.

On top of those two, we also said goodbye to Mousesports, Titan, Arrow Gaming, Na’Vi US, Liquid, Virtus Pro, CiS Gaming and Empire. After that bloodbath, eight teams were left to go to Seattle: VG, EG, Newbee, DK, Na’Vi, LGD, IG and Cloud 9. The first four were in the upper bracket and the rest in the lower.

This is how the tournement is laid out